Representing one of the greatest come backs in over-hunting by man, the Fur Seal is now a highly populated species of the antarctic converge.  Males are extremely territorial during the breeding period to protect their harem.  They are faster than a human on land and I have heard stories about tripods having legs sheered off trying to keep a Fur Seal back.  Over 4 million Fur Seals can be found on South Georgia alone and may be the reason why these seals sometimes hunt penguins as a source of food.  It is possible that when  food is scarce, around fur seal populated areas, penguins become an alternate part of the diet.  Aside from the violence associated with these animals, I’ve actually read more stories of them playing with humans.  Games of hide and seek seem to be the favorite.  People who have spent time in the area refer to fur seals as the dogs of Antarctica.

Nobody knows where the name truly came from, but their diet is mostly krill.  They actually don’t eat crab at all.  Crabeaters are the most abundant species of seal, numbering around 15 million!  It is believed a crabeater eats anywhere from 20-25 times its bodyweight in a year, so the entire crabeater population could account for the consumption of over 100 million tons of krill each year.  It is also believed the huge crabeater population grew because of whaling.  WIth the whales’ numbers reduced, there was more krill for the crabeaters.  They’re typically found on the ice in the Ross Sea. 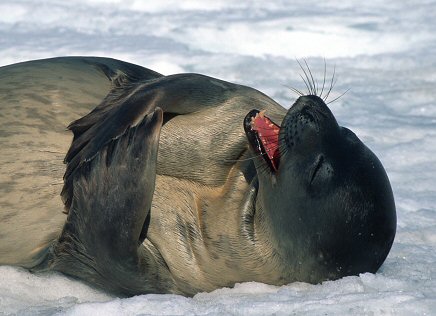 These “smiling” seals are the most southerly-going of all the seal species.  They are usually found on Antarctica, but some small populations can be found on South Georgia.  They are also one of the largest seals and are some of the deepest-diving too.  Dives have been recorded down to 2,400 feet!  They’re able to slow their heart rate down to 75% on these deep dives and have the ability to stay submerged for up to an hour.  They eat fish and krill, and typically dive deep in the search of Antarctic cod.  During the winter, Weddel Seals work to keep breathing holes open in the ice.  They typically live 12 years, but one was recorded to be 22 years old.  They only live as long as their teeth

The Leopard Seal is the main predator of Antarctica.  They are the penguins’ biggest threat.  To see a leopard seal catch and eat a penguin is a grisly affair.  In order to get past the penguin’s feathers, a leopard seal has to shake the penguin until it basically comes out of its skin.  They also feed on fish and krill, and also smaller seals.  They can be found swimming around the same beaches penguins inhabit and around Weddel Seal spots on Antarctica.  They have not been known to attack humans, but have punctured some zodiacs out of curiosity.  Killer whales are their only predator.  The leopard seal was named for the spots on its coat.

Named for its large size and the trunk-like probiscis of the bull, the Elephant Seal is the largest of all seals.  Males seek to attain the rank of “beachmaster” meaning they will be able to pass their seeds to a harem of up to 100 females.  When males fight for the beachmaster status, they can raise their bodies up to 9 feet high and slam into each other.  Males typically are seen with scarring or bloody tears around their necks.  They eat squid and deep water fish.  Dives have been recorded as long as 30 minutes down to 3,300 feet!  Elephant Seals make a nasty noise that sounds like a ferocious burp.  Their pups are abandoned as “weaners” and sit around posing for photographers 🙂 until they’re able to head to sea.